LONDON DESIGN FESTIVAL: LCC 160 | STEREOHYPE 2004–2014London College of Communication has launched a trio of exhibitions as part of this year’s London Design Festival, showcasing 50 years of illustration, 100 years of graphic design and ten years of button badges.
___ The exhibitions are open at LCC until late October and include a look at a new Laurence King book on illustration, a collection of 1000 badges from Stereohype and an exhibition celebrating poster designers Tom Eckersley, Abram Games, FHK Henrion, Josef Müller-Brockmann and Paul Rand.

50 YEARS OF ILLUSTRATION
In the college's Upper Street Gallery, 50 Years of Illustration presents extracts from a new book of the same name by Professor Lawrence Zeegen, Dean of LCC's School of Design, and Grafik founder Caroline Roberts. Published on October 1, it charts developments in illustration from the 1960s to 2010 and showcases iconic artwork from each decade alongside essays on the social and political factors influencing illustrators at the time.
___ The show is divided into five sections (one for each decade) and each display features an introductory essay on the period alongside spreads from the book and key work reproduced in large-scale prints.
___ The 60s includes work by Klaus Voormann, Pushpin Studios, Maurice Sendak and Heinz Edelmann and comments on the expressive nature of image-making at the time, the influence of hallucinogenic drugs and political reform on popular culture and the influence of Victorian typography and art nouveau in illustrations from the period: The 70s focuses on punk culture and a DIY aesthetic, with work from Roger Dean, Ian Beck, Alan Aldridge, Raymond Briggs and Philip Castle, while featured illustrators from the 80s include Barney Bubbles, Huntley Muir, Hunt Emerson, Patrick Nagel and Marshall Arisman (creator of the cover image for Breat Easton Ellis novel American Psycho).
___ The 90s and 00s sections highlight the explosion of digital media and the introduction of a new digital aesthetic. Kate Gibb, Shephard Fairey, Jasper Goodall, Marion Deuchars and papercut artist Rob Ryan are among those featured. It's not a comprehensive overview of the history of illustration - as Zeegen points out, the book and show is "a mere slice of the discipline's rich heritage" - but it does provide a look at some of the most influential and widely recognised book jackets, album art and posters in modern history, and illustration's relationship with popular culture.

100 YEARS OF GRAPHIC DESIGN
Elsewhere in the college, Alan Kitching and Monotype: Celebrating the centenary of five pioneers of the poster commemmorates the 100th anniversary of the birth of Abram Games, FHK Henrion, Josef Müller-Brockmann, Paul Rand and Tom Eckersley (Eckersley set up the school of graphic design at the London School of Printing, now LCC).
___ The show was curated and designed by Daniel Chehade and features some of the designers' best-known posters, from Eckersley's 'Cyclists, keep them clean' and Victoria line designs to Games' work for London Transport.
___ It also includes video interviews with Games, Eckersley and Henrion, in which the designers reflect on their craft and perceptions of graphic design, specimen books from Monotype's archives for fonts used by the designers, including Futura and Rockwell, and spreads from textbooks and issues of Graphis which feature articles on their work.
___ Alongside this is a look at the making of a series of screen prints commemorating each designer, which were commissioned by Monotype and designed by Alan Kitching and Chehade.
___ Originally exhibited in Monotype's Century exhibition, held in New York to mark AIGA's centenary, each screenprint features a monogram for that designer, made up of overlapping letters - in each case, one from Monotype's archives and a wood letter from Kitching's workshop.
___ The finished prints are beautifully produced, and hang alongside the designers' posters in the gallery. A short film explains the making of the project and offers a look at the printing process, while wood letters, inks and sketches are housed in glass display cases. It's a fascinating look at printing and a stunning selection of historic posters.

STEREOHYPE 2004–2014
The third event on show at LCC celebrates the tenth anniversary of graphic art label Stereohype, founded by design studio FL@33. The label runs an annual button badge design competition each year and regularly invites designers to create badges for its By Invitation Only range. Over one thousand button badges are featured in the exhibition – some fixed to the gallery walls, others in glass display cases and a framed artwork (close up below).
___ To celebrate the exhibition and its anniversary, Stereohype commissioned ten designers and artists to create a badge and letterpress poster inspired by the number 10 and/or 1000, or 10x10, all of which are on show at the gallery alongside a 10 foot squirrel sculpture, below. Contributing creatives include Kitching, Build's Michael Place, Daniel Eatock, Genevieve Gauckler, Vaughan Oliver, TwoPoints and FL@33 co-founder Agathe Jacquillat. Ten giclee prints of each poster are on sale priced at £350 each, excluding Kitching's which is available as a letterpress poster (also in an edition of 10) for £750.
___ Visitors to the show can also design and submit their own button badges at the show - and a catalogue featuring every button badge designed is available to purchase at the event (cover and spreads shown below).
___ 50 Years of Illustration and Stereohype 2004-2014 are on show at London College of Communication SE1 6SB until – extended to – November 8 (was October 31). Alan Kitching and Monotype: Celebrating the Centenary of Five Pioneers of the Poster is open until October 16. For details, see events.arts.ac.uk 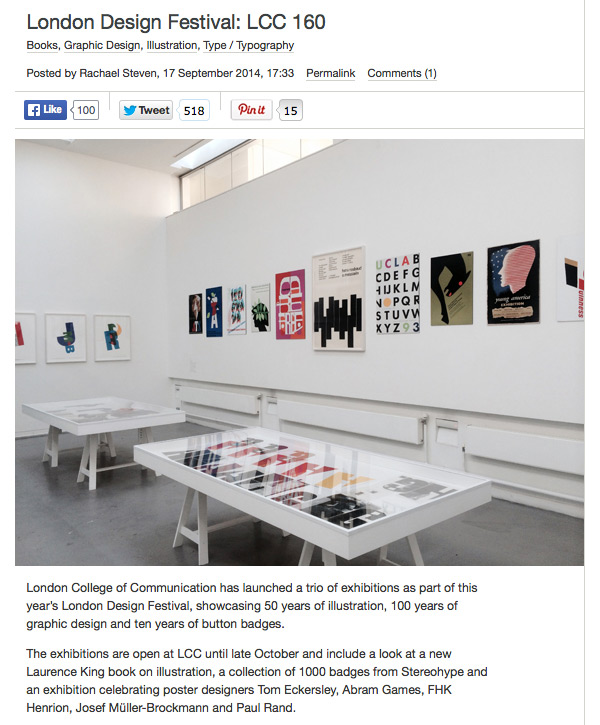