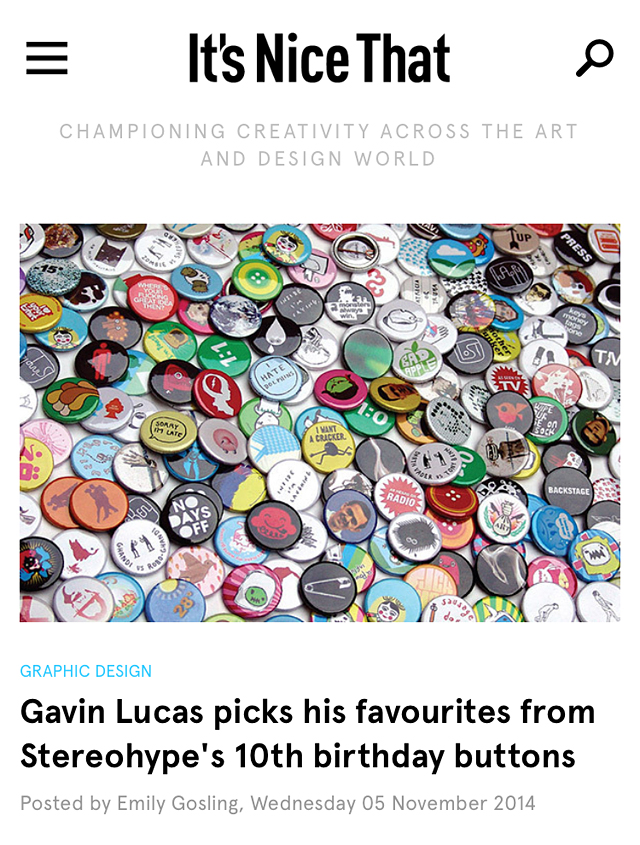 GAVIN LUCAS PICKS HIS FAVOURITES FROM STEREOHYPE'S 10TH BIRTHDAY BUTTONS
FL@33’s graphic arts label Stereohype is celebrating its tenth birthday this year, an occasion that also marks the launch of its 1,000th button badge. Over the years, these have been designed by the likes of Supermundane, Jon Burgerman, Lawrence Zeegen and Luke Best, to name but a few, and they’re currently on show with some brilliant posters at London College of Communication in an exhibition running until 8 November.
___ For the ease of their creation and their miniature stature, the little pin badges can be a perfect “vehicle for expression embraced by the visually creative,” as writer Gavin Lucas states in his foreword for the exhibition catalogue accompanying the show. Gavin has drawn together his top ten Stereohype badges for us, giving just a tiny snapshot of the creativity poured onto these wee circles over the last decade.
|1| I Hate Dolphins by Jody Barton (0023) | From Stereohype’s original By Invitation Only (BIO) series, Jody Barton’s I Hate Dolphins is probably the most amusing nugget of political incorrectness ever committed to the medium of the button badge. Great for first dates or meeting the in-laws for the first time. Personally, I quite like dolphins. But I couldn’t eat a whole one.
|2| Ghandi vs Robo-Ghandi by Tom Gauld (0042) | Again, this is a series 1 BIO badge. It’s just such a ridiculous and funny concept that I still chortle every time I see it.
|3| Sorry I’m Late from BIO series 2 by Richard J. Kirk / Manikato (0091) | I’m pretty much always late so this is a badge for all occasions as far as I’m concerned.
|4| 0358 by Pietari Posti | I love this badge by Pietari Posti (which won 2nd prize in the 2007/2008 competition) because it’s illustrative, figurative and decorative all at once. It’s a miniature work of art.
|5| 0507 By Germana Giorno (entered in the single category in 2010 competition) | This also strikes me as a miniature abstract artwork. While a diamond might be a girl’s best friend, a diamond design badge offers far more bang (and bling) for your buck.
|6| 0974 Russell Weekes for BIO | This is one of a series of four matter-of-fact Helvetica-set badges designed by Russell Weekes for BIO series 14. I’m not normally into this kind of text-only badge, but I love the combination of honesty and practicality.
|7| 0870 & 0875 Tomi and Agathe at FL@33 | These two badges are from a series by Tomi and Agathe at FL@33 that celebrates the colourful, abstract beauty of a computer screen during a crash. I really like the way you associate such screens with despair but actually, the patterns they generate can be pretty beautiful.
|8| 0921-4 By David Petzold aka Lobsterboy | Doesn’t matter what type of push bike ride you’ve got – this set of four badges (which took 4th prize in the set of four category in 2013 Stereohype badge competition) has got you covered.
|9| Stereotype vs Art & Sole collaboration | OK, rather than pick out more individual badges, I wanted to flag up the Stereotype vs Art & Sole collaboration that resulted in a collection of A Few Of My Favourite Sneakers (AFOMFS) badges. You could buy the whole collection attached to specially produced sneaker laces – but my favourite part of the collaboration is the bespoke packaging you can buy smaller subsets of the badges in that have eyelets and are laced up like actual sneakers. Really nicely done. See more images of the badges and the packaging here.
|10| Stereohype’s 1,000 badges created to-date | And my final choice is the 100 × 100cm Perspex framed collection of Stereohype’s 1,000 badges created to date that’s on display at their exhibition at London College of Communication at the moment and available to buy in an edition of 10. | Further reading: www.stereohype.com