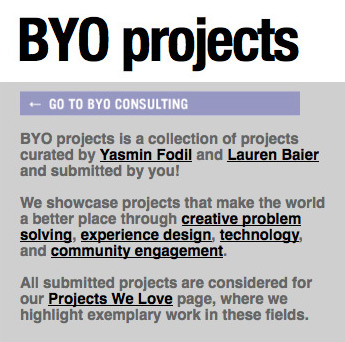 BYO PROJECTS | 3 FEBRUARY 2012
Bzzzpeek: Interactive Onomatopoeias – Although it’s existed online for a few years now, I only discovered this awesome project a few months ago at Talk to Me, a seriously amazing exhibit at the MoMA in 2011. (Look here for more about the show: moma.org/...) This project was just one of almost 200 works displayed, but it really caught my interest. Maybe it’s my curiosity about sociolinguistics… maybe I just find it to be unbearably cute… but I show this website to almost every person I meet.
___ Bzzzpeek is an online collection of onomatopoeias (words that imitate the sounds they represent, like “meow”) spoken by children from around the world. There are about 30 different types of sounds to choose from, like cats, dogs, frogs, mice, trains, and car horns. Click on the type of sound you want to hear, and you’ll get a few pages of audio clips organized by country.

1| How does this project make the world a better place?
These sounds are interesting to think about. We all know that people in other countries / cultures / regions speak different languages, but we don’t often think about their sound effects! It’s interesting to think about why certain sounds differ between countries. It’s important to think about the world from anothers’ perspective, and that thinking can be put into practice in a multitude of applications.
2| Who is the intended audience?
Although I’m not sure who it was intended for in the beginning, I think this project has had several audiences over time. A lot of people are probably interested in it purely for entertainment. It’s also an cool resource for those researching the topic of sounds/onomatopoeias in various languages.
___ An interesting thing to note about the site is that the navigation is almost completely visual – you don’t need to read any words to use it. To choose the type of sound you want to hear, you click on a picture of that thing. When you get the list of audio clips, the country each result represents is denoted by the use of its flag. This widens the audience greatly and makes so much sense for a site that is about the difference in language between countries.
3| How can our readers extend the impact of this project?
I think a big takeaway from this project is the fact that the presentation of the work matches the idea of the project overall. It’s about different ‘languages’  and therefore doesn’t use much language – it’s all done through images. Staying true to the sentiment of a project is important.
___ The biggest way that people can extend the impact (joy) of this project is just by sharing it with others. It’s incredibly fun to share this website with a new friend or colleague, especially if you interact with it together. The site makes me super happy and I like to share that happiness with others – everyone should do the same!

July 24th, 2011 — FL@33's award-winnning online sound project bzzzpeek.com is currently being exhibited at MoMA – New York's Museum of Modern Art. Bzzzpeek is featured as part of the exhibition Talk To Me organised by senior curator Paola Antonelli and curatorial assistant Kate Carmody. Here is a link to the Bzzzpeek page on the dedicated exhibition website. Talk To Me is open to the public from today until November 7th, 2011. An exhibition catalogue bzzzpeek.com is also featured in is available at the MoMA store.