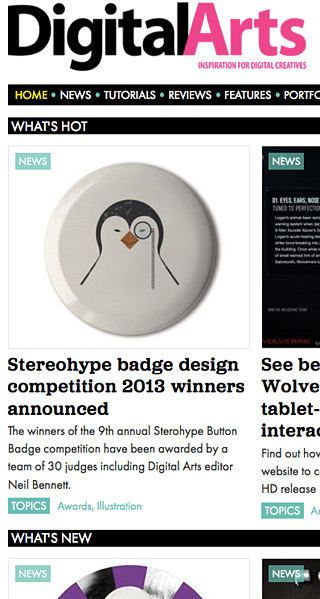 DIGITAL ARTS | ONLINE 11 NOVEMBER 2013
Stereohype badge design competition 2013 winners announced –  The winners of the 9th annual Stereohype Button Badge competition have been awarded by a team of 30 judges including Digital Arts editor Neil Bennett.
___ The graphics art label has released its own B.I.O. (By Invitiation Only) 13 range and a custom designed shoelace box.
___ First to fifth prizes were awarded in two categories: for individual badges and sets of four. The top single badge prize went to Shiva Karamzadeh, while the first prize for a set went to Sara Cunha.
___ Stereohype also gave out its own special prizes in both categories, which went to Cynthia Bataille for a single badge and Jono Sandilands for a set.
___ The judges also included writers Angharad Lewis, Gavin Lucas, Liz Farrelly, previous winners and of course Tomi and Agathe from the graphic arts label (and the associated design studio FL@33). — You can buy the winning badges from the Stereohype website.